CHC > Featured > Council of the Federation 2017

Council of the Federation 2017

2014 marked the end of a 10-year agreement (“Health Accord“) between the Federal government with the provinces and territories to provide stable, predictable, and targeted funding for public health care. Instead of collaborating on a new agreement, the Federal government created bilateral deals with the provinces and territories. The text of these deals is still not public, but what we do know is that all provinces (with the exception of Manitoba) have accepted federal money for health care that is tied to Gross Domestic Product (GDP) with a floor of three per cent. Meaning when Canada’s economic situation improves we have more money for public health care, but when our economy worsens and people rely more on public health care, we have less money to provide services. The floor of three per cent means that regardless of how low GDP might fall, the government must continue to increase federal health payments by at least 3% per year.

The premiers of the provinces and territories have spoken out against the bilateral deals saying they felt pressure to sign-on even though they knew it was a bad deal. Three separate and independent bodies, the Office of the Parliamentary Budget Officer, Conference Board of Canada, and the Financial Accountability Office of Ontario all showed that the provinces and territories need federal money for health care to grow by 5.2% a year in order to fund the current basket of provincial health care services.

“Quebecers do understand the simple math of those things,” he said. “They understand that we are being lured into a deal that really means that it’s going to be less care.” Gaétan Barrette, Quebec Health Minister

“By Ontario’s estimates, we’ll spend $29 billion over the next five years alone on mental health and home care. The federal government has offered to provide roughly seven per cent of that total, or $1.9 billion. That’s simply not sustainable and that’s why the premiers have asked the prime minister for a meeting early in the new year.” Eric Hoskins, Ontario Health Minister

Using media reports and provincial government news releases the Canadian Health Coalition has put together what has been publicly announced in each deal and crunched the numbers. Similar to the report released earlier this year by the Institute of Fiscal Studies and Democracy, we are projecting a $33 billion cut in public health care dollars as a result of the bilateral deals. This cut comes from the change between the 5.2% escalator that third parties have said is needed and the escalator tied to GDP announced as provincial bilateral deals were signed. Manitoba has been calculated at 3.5 flat as the federal government publicly stated that provinces who did not sign would get 3.5 and no additional money for mental health and home care. Some provinces also saw money to help respond to the opioid crisis. It has been reported by the Saskatchewan government that they signed a deal which allows them to experiment with privatization and two-tiered access to diagnostic imaging. This has been denied by the federal government but neither party has released text of the deal that was made.

The images below show the loss of funding for each province. There are examples given to translate the amount of money into services. These are just examples of what that amount of money could buy, they are not based on any comments by provincial governments as to how they will make up the loss in federal transfer dollars. No provinces have commented on that yet, although the Canadian Health Coalition and our allies expect that provinces will resort to contracting out and privatizing more public health care services to make up for the cuts. 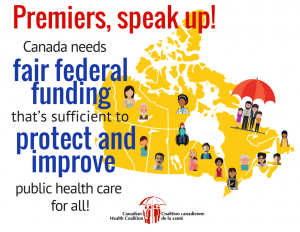 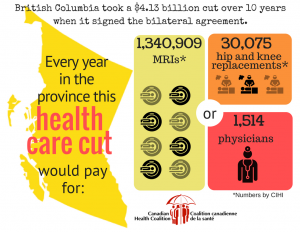 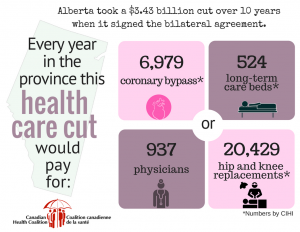 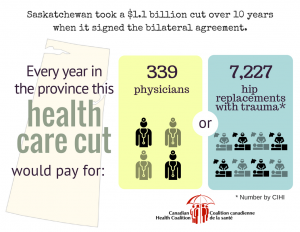 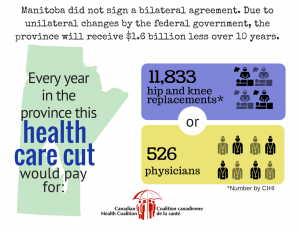 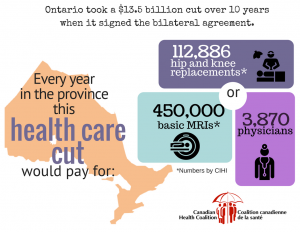 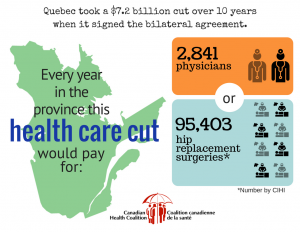 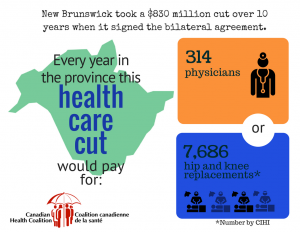 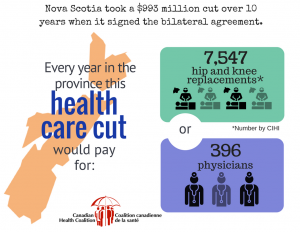 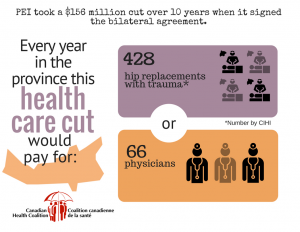 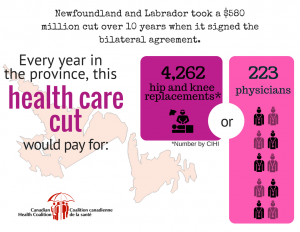